A depiction of the “cut sleeve” story, where the emperor is getting some help with the scissors

We’ve talked before about how the ancient Chinese story about the bitten peach became a euphemism for homosexual love, but it isn’t the only ancient Chinese story about an emperor and another guy falling in love that has essentially been trimmed down to a short coded phrase — in this case “the passion of the cut sleeve.” I know, I know, it sounds like it’s about an enthusiastic but inept tailor. It’s not — it’s about Emperor Ai of Han.

Born as Liu Xin in 27 BCE, his father was Prince Liu Kang of Dingtao and the brother of the childless Emperor Cheng. Xin was never raised by his parents, however, but was instead put in the care of his grandmother Consort Fu. Kang died in 23 BCE with only one heir — the four year old Xin, who became the Prince of Dingtao. For several years, he seemed to be just flying under the radar until 9 BCE when he visited his dear old uncle Emperor Cheng. Typically, a prince would bring an escort of teachers along for such a visit — Xin, however, brought his teacher, the prime minister of his principality, and a military commander. When asked, Xin quoted the exact regulations that not only permitted this but — in Xin’s opinion — required it. Cheng was impressed, and became even more impressed when Xin began discussing Shi Jing, a one of the Confucian classics.

The following year, Cheng gathered together his advisors to settle on who Cheng could adopt to be his heir. It was pretty quickly decided that it should be Xin. This was not without it’s problems however — Cheng was determined that Xin should act as though Cheng was his only parent. He banned Consort Fu and Consort Ding (Xin’s mother) from the capital Chang’an, so they could not see the Crown Prince Xin. He did eventually relent (after much coaxing from his own mother) and allow Consort Fu to visit, under the rationale that she had served as a wet nurse.

Although this caused some tension, it was short lived because Cheng died in 7 BCE either from a stroke or from overdosing of unnamed aphrodisiacs given to him by his favorite Consort Zhao Hede. At 20 years old, Crown Prince Xin became the Emperor Ai of Han and his reign started very well. He immediately took a much more hands on approach to ruling than his predecessor, cut government spending, and took efforts to reduce involuntary servitude by limiting the number of servants members of the nobilty could have and freeing all servants over the age of 50.

However, Ai’s reign was soon rocked by controversy. Ai was still caught between loyalty to Cheng’s family, into which he had been adopted in order to become emperor, and the family that bore and raised him. In order to soothe the emperor, his step-grandmother Grand Empress Dowager Wang created titles for some of his relatives including Consort Fu who became Empress Dowager Gong of Dingtao. While this did help Ai, it created a rivalry between the Fu clan and the Wang clan — many members of the Wang clan were mad at the creation of titles for these relatives of the emperor, whereas Fu herself believed that her title was subpar and was really determined to hold onto a grudge. Although Ai attempted to stay out of it, ultimately he accepted the resignation of Wang Mang — the highest ranking Wang (outside of the Grand Empress Dowager herself) in his administration and the whole family soon lost most of their political influence.

Fu’s ability to hold a grudge would create even further controversies for Ai in 6 BCE. Long story short, she ordered an investigation into the family of a former romantic rival of her — the investigation was brutal and ultimately led to seventeen deaths including the death of her former rival. Meanwhile, Ai himself was frequently ill with some kind of chronic illness — an effort seems to have been made to keep this quiet, so there’s very little information. Ai was also developing a reputation for harshly punishing people in his administration and then changing his mind about it a short time later and conversely, promoting people into his administration and then abruptly firing them for little or no apparent reason. 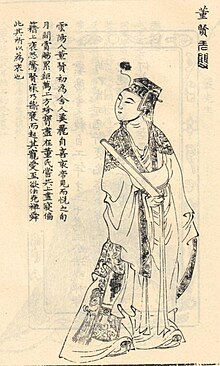 And then came Dong Xian. It is generally agreed that most emperors of the Han dynasty, although married to women, took on male lovers and it is generally agreed that the relationship between Emperor Ai and Dong Xian was one of these kinds of relationships. Their relationship began in 4 BCE, at which point Dong Xian was a very minor court official. Dong was 19 years old and was also married to a woman. Emperor Ai started throwing all kinds of promotions and honors at Dong — at a rapid rate that unnerved everyone else. However, anyone who opposed this was severely punished. A palace secretary general named Zheng Chong, for instance, was arrested and died in prison. Sun Bao — who had not objected to Dong Xian’s rewards but had attempted to free Zheng Chong from prison, was removed from his station.

Dong and his wife moved into the imperial palace pretty quickly in the relationship, but soon Ai ordered a lavish residence — as lavish as the imperial palace — be constructed for Dong and his wife. He gave Dong the most expensive jewelry in the imperial treasure and the best weapons in the armory. (The security chief for the capital city, Wujiang Long, tried to block the weapons from being given and was subsequently demoted to be security chief to a little area on the outskirts of the empire.) Emperor Ai even ordered that a tomb be constructed for Dong right beside his own tomb.

By 3 BCE — oh, right, all of that was in the first year of their relationship — Emperor Ai was intent on promoting Dong Xian to the rank of marquess. Now, the year prior a eunuch name Song Hong had reported that a prince was using witchcraft — the prince was demoted to the rank of a commoner and ultimately killed himself. To justify promoting his lover, Emperor Ai gave Dong the credit for reporting this crime. The following year, the prime minister Wang Jia — who had already tried to block the promotion — wrote a carefully worded letter saying he was concerned about what might befall Dong Xian if Emperor Ai should die first. It, predictably, didn’t go over well and Wang Jia was imprisoned under false charges, and then he killed himself. Anyone in the administration who grieved for him after his death was removed from their offices — including the emperor’s own uncle Ding Ming who was commander of all of the empire’s military forces.

Ding Ming was replaced by a man named Wing Shei — however, Wing Shei died from an illness within the year. And So Emperor Ai made Dong Xian the commander of the empire’s military. In doing so, Ai issued an edict which said “Heaven gave you to be the helper for the Han Dynasty. I know your faithfulness, and I hope that you can guide the great affairs of the empire and follow what is good.” This alarmed a lot of members of the court, because it echoed famous words used by Emperor Yao when he passed his throne to Emperor Shun.

Despite his new position, however, Dong Xian remained with the emperor in the palace at all times and did not do any actual commanding of the military. Meanwhile, a whole bunch of Dong Xian’s relatives were given important positions in the government — some of them even replacing members of the emperor’s own family. 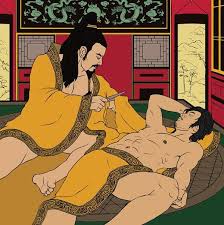 Another depiction of the “cut sleeve” story

It was some time around this period — when Dong Xian was the head honcho general — when the famous story that would make its way into the romantic hearts and minds of China’s imagination was said to take place. According to the story, Emperor Ai and Dong Xian fell asleep together on a straw mat. When the emperor awoke, Dong Xian’s head was on his sleeve. In order to allow him to continue sleeping (after a hard day of not actually commanding the military), the emperor cut off his sleeve and left it under Dong Xian’s head. It is a really sweet story, if you ignore the absolute havoc their relationship was causing in Emperor Ai’s administration.

The next year, 1 BCE, Emperor Ai’s chronic illness — whatever it was — got the best of him. On his death bed, he decreed that his heir was Dong Xian. When he passed away a short time later, everyone — and I mean everyone, including Dong Xian — ignored this decree. Dong Xian, for his part, may not have been totally ignoring it but he was in so much shock he failed to do anything. The Grand Empress Dowager Wang, however, was not so shocked — she immediately grabbed the imperial seal to prevent Dong Xian from getting the throne. Then, she reinstated her relative Wang Mang (remember him?) and transferred command of the military to him.

Wang Mang used his newfound power to accuse Dong Xian of failing to attend to the emperor while he was dying and banned him from the palace. The next day, Dong Xian was stripped of his titles. He and his wife committed suicide that night. Although they were buried quickly, Wang Mang had Dong disinterred and reburied in a prison. Not in the fancy tomb that got built in the first year of their relationship together, in a prison. (This is why you should always wait to build a tomb for your new boyfriend!) The entire Dong family was banished and all of their assets were taken by the imperial treasury. This, by the way, was pretty much exactly the sort of thing that Prime Minister Wang Jia had been warning about in his letter. Oops.

Anyways, much like the previously mentioned bitten peach thing, the story of Dong Xian and Emperor Ai and the cut sleeve was passed down for centuries, and was often used to describe homosexuality. In fact, “Cut Sleeve” is even the title of a short story by Pu Songling in the third edition of Strange Stories from a Chinese Studio, about a homosexual romance. It was first published in 1740 CE which is one thousand seven hundred forty-one years after Dong Xian’s death. As much as this was not a charming love story for the Chinese empire at the time it was happening, and as much as they moved way too fast, there’s not a lot of love stories that have endured so long.